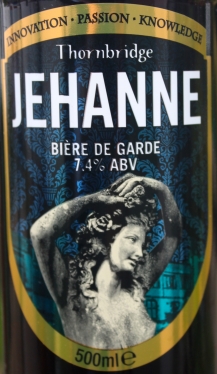 Beer has been brewed in France since time immemorial, with its beer-drinking culture concentrated in those areas bordering Belgium and Germany. Elsewhere, of course, wine has always been the alcoholic beverage of choice.

So while its neighbours have each spawned a host of recognisable brewing styles, the recognition given to the likes of Bordeaux or Bergerac or Champagne has never been properly applied to its beers.

The single exception to that might be the Biere De Garde, a traditional ale of the northern coast and Flemish border. The name roughly translates as “beer for keeping” and was typically brewed in spring to save for the warmer months, which were less favourable for brewing. To keep, it was typically brewed stronger, with the higher alcohol content protecting it against spoilage.

Jehanne is Thornbridge Brewery’s take on the style, brewed in the sun-kissed Cote de Derbyshire to a powerful 7.4% ABV.

It pours an attractive bright amber with a soft fruity aroma, before tripping across the palate with the careless ease of a beer garden refresher, distributing some malty, banana-ish flavours before its serious strength finally steps forward to reveal itself in a warming, mellowing, sleep-inducing aftertaste.

Jehanne may not be French, but “c’est formidable”.

Simon Jenkins began writing the regular pub column Taverner in the Yorkshire Evening Post, shortly after joining the newspaper's sub-editing team in 1991. More than 25 years on, the column remains a regular weekly feature of the newspaper. Simon has written about beer and pubs for numerous other publications and has won a number of awards from the British Guild of Beer Writers, including its highest accolade – Beer Writer of the Year – in 2010. He has also written three books. His first, the Great Leeds Pub Crawl, is a guide to all the best pubs of his home city, and was published in 2011 with a second updated edition published in 2016. His most recent book is the Yorkshire Beer Bible, which is a guide to more than 170 breweries across Britain's largest county. View all posts by Simon Jenkins

This is a text widget, which allows you to add text or HTML to your sidebar. You can use them to display text, links, images, HTML, or a combination of these. Edit them in the Widget section of the Customizer.